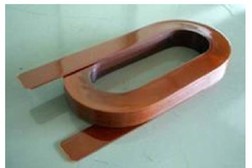 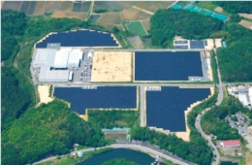 Products and Services that Contribute to Building a Decarbonized Society

For the Group, tackling climate change has been one of its most important management issues for building a decarbonized society. Reflecting this, the Group has been approaching manufacturing with a view to reducing the environmental impact and has developed and promoted the use of renewable sources of energy, such as geothermal energy.

We regard “next-generation vehicles,” “IoT and AI,” “urban mining” and “clean energy and decarbonization" as social needs that the Group should grasp in our medium-term management strategy. In the areas of "next-generation vehicles" and "IoT and AI," we will expand the business areas of its copper products, seals, wear-resistant tools, and sensors, etc., while developing new products and businesses. In the areas of "urban mines" and "clean energy and decarbonization," we will create new products and businesses from among those related to recycling, renewable energy and hydrogen society. As specific examples for next-generation vehicles, we have been making announcements since 2019 on the development of thermal conductive putty which is a material softer than thermal conductive rubber, uniform electrodeposition coating technology for high-heat-resistant and high-insulation resins, and die-bonding sinter materials for next-generation power modules. We are promoting dissemination by advancing the elemental technology development which is indispensable for next-generation vehicles. We will continue our development to be put into practical use in stages by around 2050. 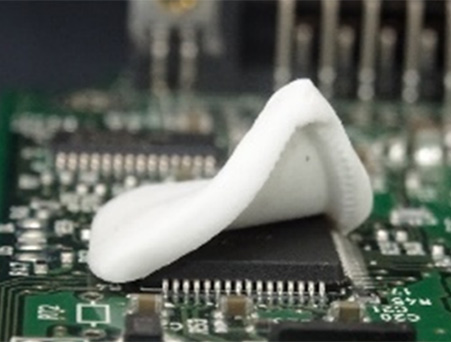 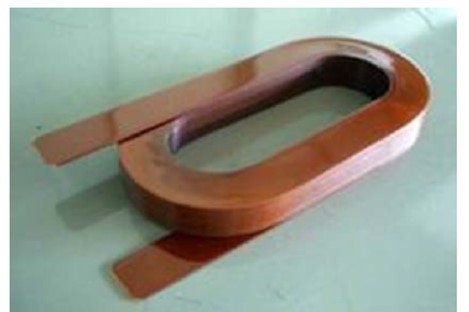 High insulation reliability under high temperature is required for coils used in power inductors, motors and reactors, which are used in inverters for controlling high-output motor power supply of next-generation vehicles.
Recently, with demand for further miniaturization of those coil devices, a uniform coating technology is getting required to perform insulation of complex-shaped conductors. We have developed a unique electrodeposition technology that can uniformly coat resin film with high heat resistance and high insulation property even for complex shapes.
Moving forward, we will aim to commercialize the electrodeposition technology and enter the incubation phase in fiscal 2024. 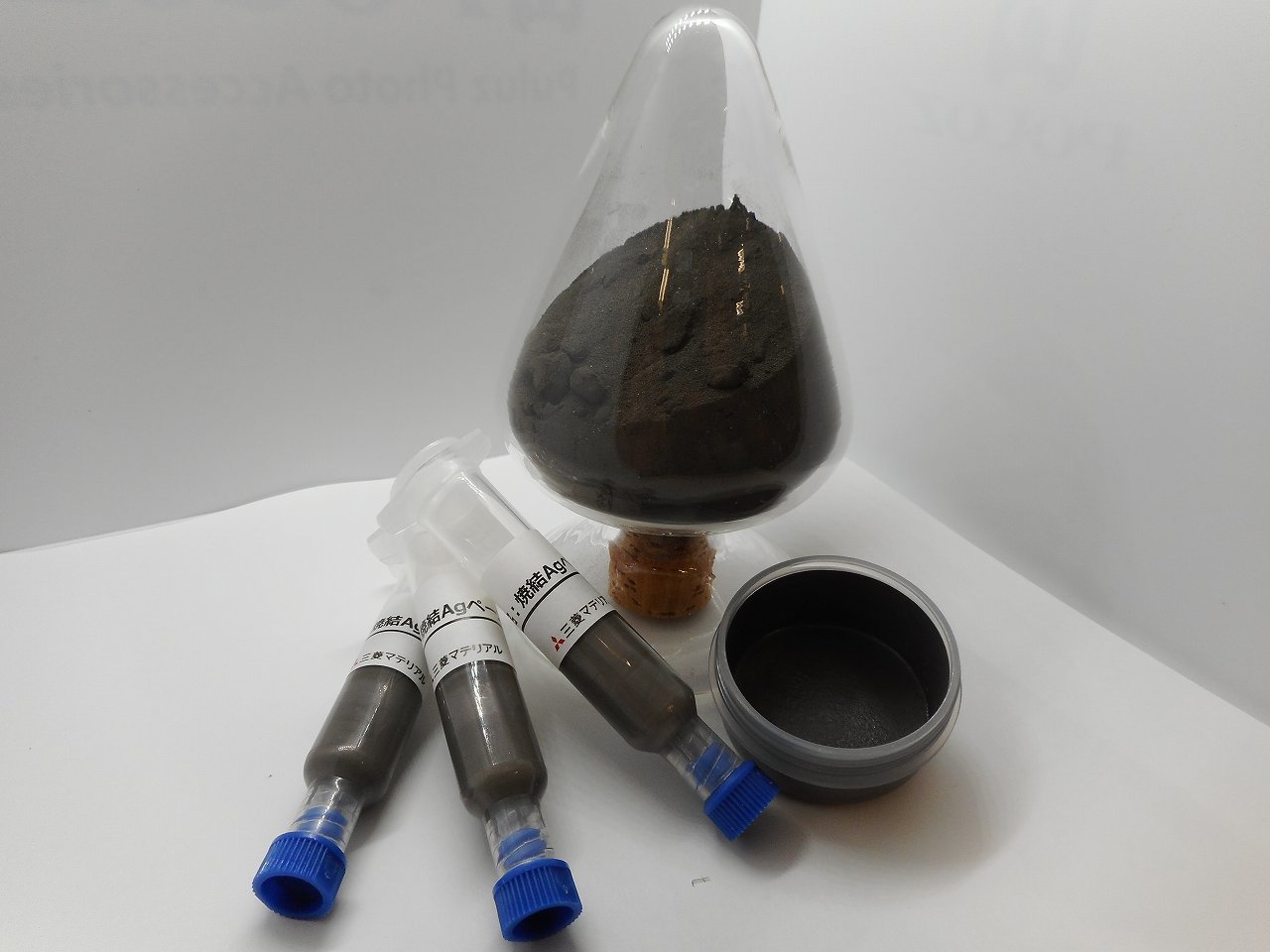 In the next-generation type power module used in the inverter for high output motor power supply control of the next-generation vehicle, there is a demand for the function enhancement in the die bonding for high-temperature operating semiconductor element such as SiC to the copper material. Previously, it was necessary to apply precious metal plating such as gold and silver to the substrate surface, and pressurize while heating. We have developed a die bonding material that can bond semiconductor die to substrate without pressure nor precious metal plating to the copper surface of the substrate, and can exhibit the bonding strength and heat resistance equivalent to the conventional die bonding products.
In the future, further improvement of reliability and optimization of the process will be carried out, and the commercialization and dissemination will be aimed at by fiscal 2024.

In September 2021, we have developed "MOFC*1-HR" (Mitsubishi Oxygen-Free Copper - Heat Resistance), an entirely new oxygen-free copper with strength and heat resistance enhanced to the world's highest level.
With the spread of EV and next-generation energy, electrical components are being required to accommodate large currents and offer high heat dissipation. Oxygen-free copper, which has the highest electrical and thermal conductivity of all copper materials, is rapidly expanding its presence in the industry.
However, oxygen-free copper had the following issues. Its strength and heat resistance are lowered when material temperature rises due to a large current, or when a manufacturing process involves heat treatment. It cannot be used for components that are required to be compact and strong at the same time.
To overcome these problems, we have combined our core technology in manufacturing high-quality oxygen-free copper with our material design technology and successfully developed MOFC-HR, an oxygen-free copper with significantly enhanced strength and heat resistance that maintains high electrical and thermal conductivity. 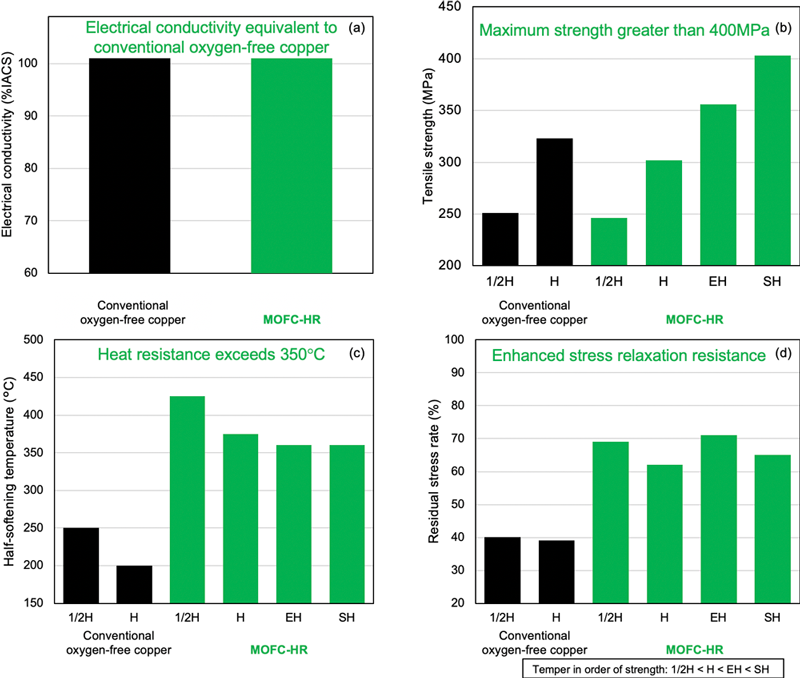 We have endorsed the GX League Basic Concept announced by the Ministry of Economy, Trade and Industry in April 2022.
The GX League will be established for companies working proactively on green transformation (GX) as a forum for discussion regarding the transformation of the overall economic and social system and the creation of related new markets, together with players taking on challenges to achieve GX, including the government, universities, public research institutions and financial institutions.
Participating Companies are expected to collaborate with and lead a wide range of entities, including supply chains, consumers and civil society, in addition to taking initiatives to reduce their own emissions, towards the achievement of carbon neutrality. We have decided to endorse it because the direction of our climate change initiatives is aligned with the intent of the GX League Basic Concept.

Activities for the Stable Operation of Existing Power Plants

In addition to operating these geothermal plants, we are currently working on new projects, too. Yuzawa Geothermal Power Corporation, established jointly with Electric Power Development Co., Ltd. and Mitsubishi Gas Chemical Company, Inc. started construction of Wasabizawa Geothermal Power Plant in May 2015 and began commercial operation of this plant on May 20, 2019. In October 2015, we established Appi Geothermal Energy Corporation in conjunction with Mitsubishi Gas Chemical Company, Inc. We were joined by Electric Power Development Co., Ltd. in June 2018. The three companies are promoting commercialization and started construction in August 2019.
In August 2021, we launched a survey to quantify the geothermal resources in the Komonomori area (Kazuno), which is located northeast of the Onuma Geothermal Power Station, using subsidies from the Japan Oil, Gas and Metals National Corporation (JOGMEC). Further, we have begun a survey to quantify the geothermal resources in the upstream area of the Appi River (Hachimantai), which is east of the Appi Geothermal Power Plant, in June 2022 using subsidies from JOGMEC. In addition, in May 2022, we invested in Hakodate Esan Geothermal G.K., which is conducting geothermal surveys and development in the Esan area (Hakodate) and became involved in the construction of a geothermal power plant with RENOVA, Inc. and Daiwa Energy & Infrastructure Co. Ltd., which will begin after the resource surveys and environmental impact assessments have been completed.
We are also in the process of conducting joint surveys with other companies in the Azuma-Adatara area of Fukushima prefecture. 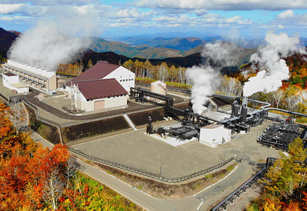 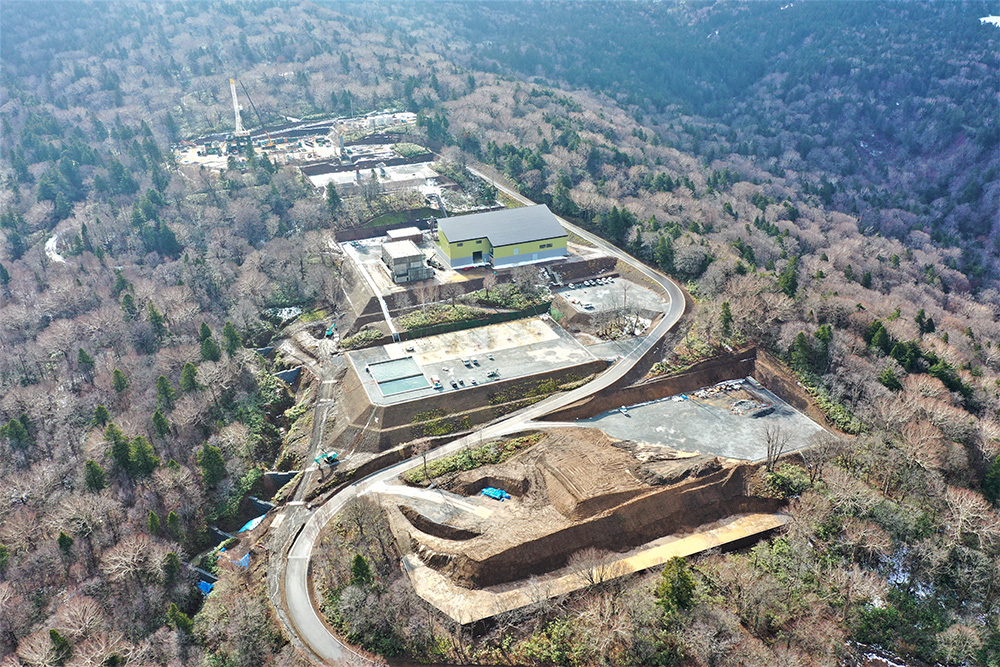 In May 2022, we have invested in Hakodate Esan Geothermal LLC (Esan Geothermal) as a new business partner of RENOVA, Inc. (Chuo-ku, Tokyo; Founding CEO, Yosuke Kiminami) and Daiwa Energy & Infrastructure Co. Ltd. (Chiyoda-ku, Tokyo; President, Morimasa Matsuda). Since its establishment in 2016, Esan Geothermal has moved ahead with business development with the aim of developing a new geothermal power plant in the Esan area of Hakodate City, Hokkaido.
We are utilizing the abundant experience and high technological capabilities we have cultivated over many years through our development and management of coal and metal mines for hydroelectric and geothermal power generation. In relation to geothermal power generation, since Onuma Geothermal Power Plant (Akita Prefecture) started operation in 1974, we have played a central role in the construction and operation of Sumikawa Geothermal Power Plant (Akita Prefecture, operation started in 1995), Wasabizawa Geothermal Power Plant (Akita Prefecture, operation started in 2019), and Appi Geothermal Power Plant (Iwate Prefecture, operation to start in 2024).
We have been working on the "development and promotion of the use of renewable energies such as geothermal energy" and intend to engage in this project by making use of our experience and technological capabilities through investment to contribute to the success of the project. 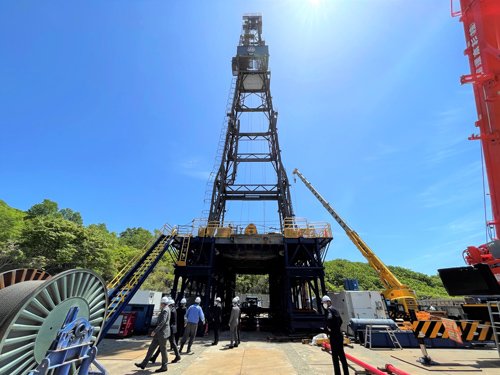 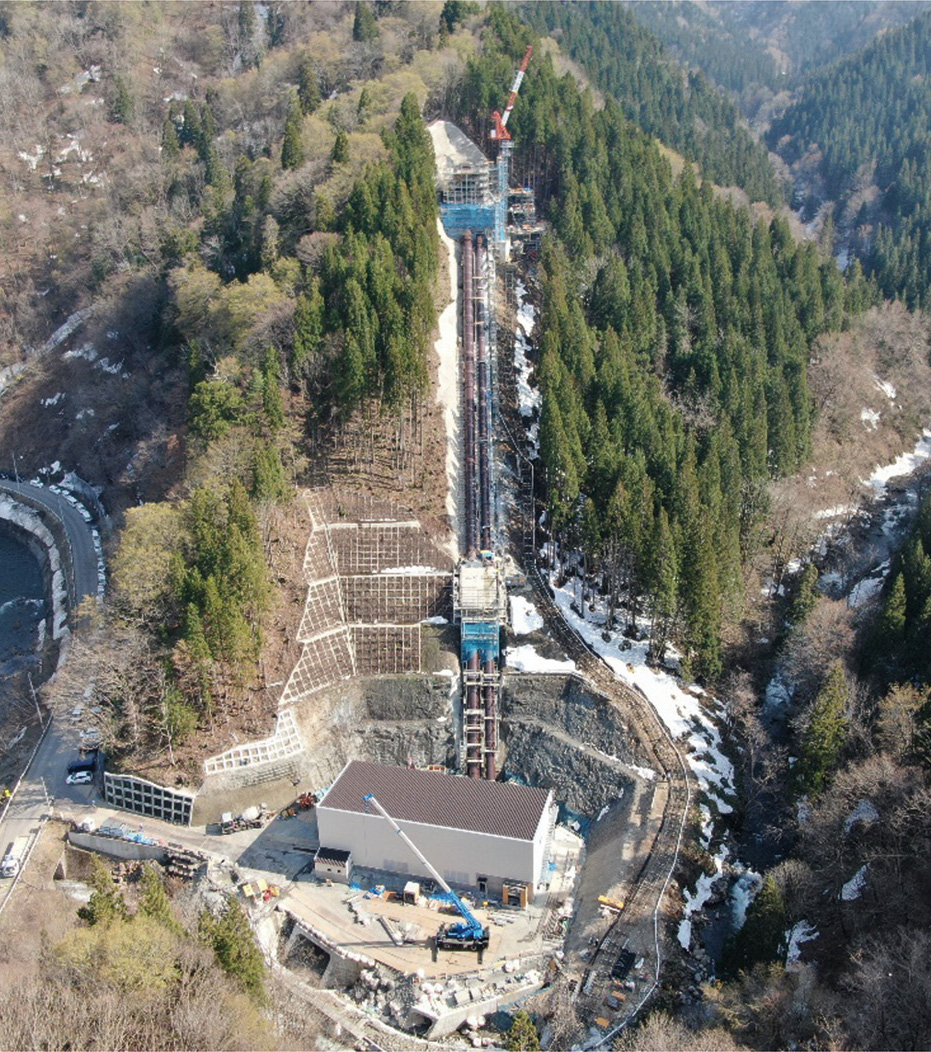 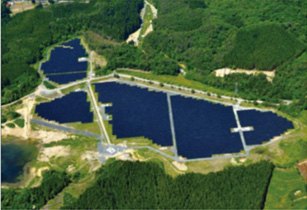 Renewable Energy's Effect on the Reduction of CO2 Emissions 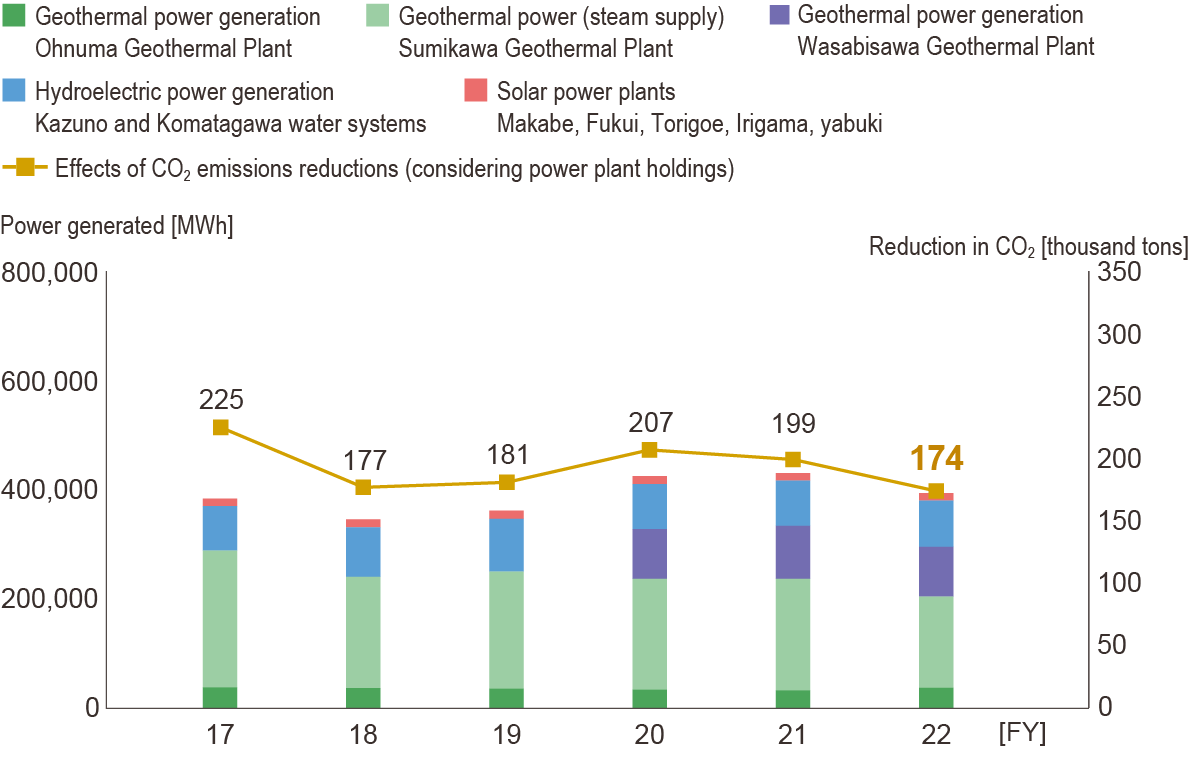 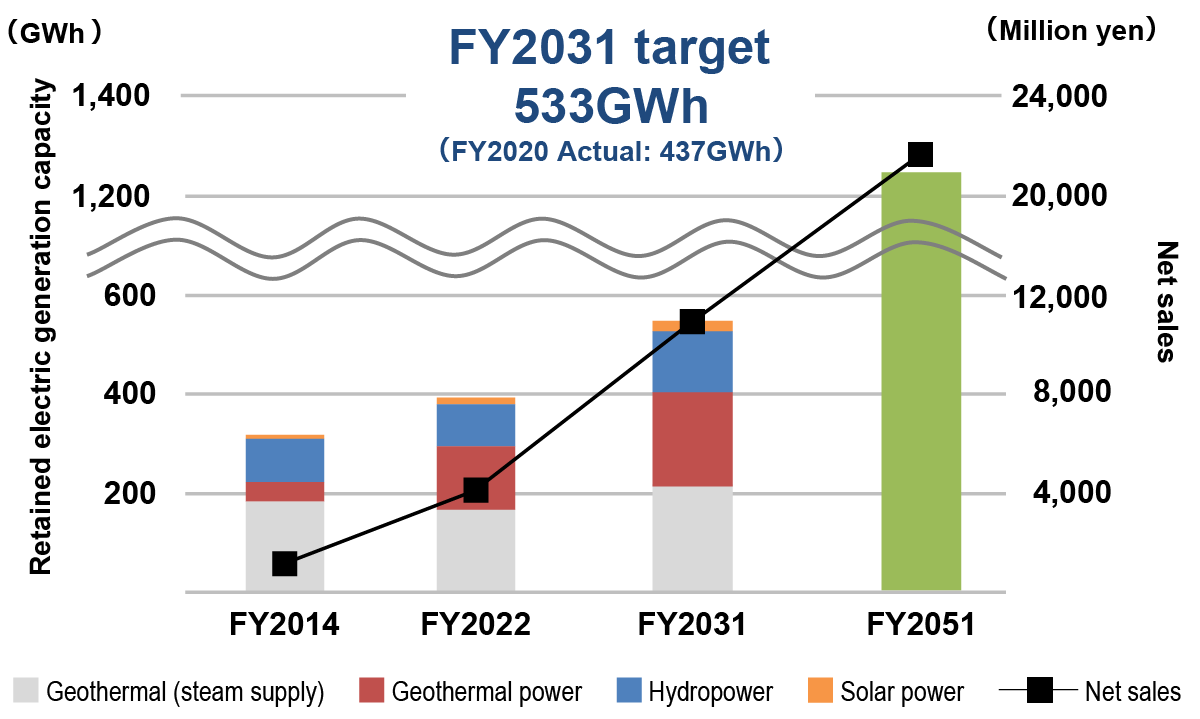 Helping to Build of a Decarbonized Society by Promoting Ground Source Heat Utilization, Which is Renewable Heat.

In 2000, Mitsubishi Materials Techno Corporation entered the business of ground-source heat, which is heat from a renewable energy source, as a provider of total engineering solutions. The company has been providing services in the process from project proposal through investigation, design, construction, and maintenance.
The company has continued its R&D efforts and acquired patented technologies through projects commissioned by the government and others, aiming to become the No.1 company in geothermal technologies. As a result, the company has succeeded in building infrastructure using ground-source heat by developing commercial systems with various heat exchange methods, including not only the common borehole method but also its patented foundation pile method as well as horizontal and earth retaining wall methods. At present, Mitsubishi Materials Techno Corporation is promoting sales of these technologies as systems for using ground-source heat utilized through urban infrastructure, aiming to contribute to smart cities in the future.
Approx. 130 systems from the company have been installed. Since 2020, the large-scale use of ground-source heat has been increasing. For example, the company completed one of the largest projects in Japan, which combines the borehole method (100 m in depth x 120 boreholes) and the horizontal method (nine units x approx. 100 m long trenches), at a city hospital in Hachimantai. It also completed one of the largest projects in the Tokyo metropolitan area, which applied the foundation pile method (66 cast-in-place piles) at the Yokohama City Hall. In May 2022, Mitsubishi Materials Techno Corporation, the Yokohama City Government, Takenaka Corporation, and other companies received the 60th Gakkai-sho Gijutsu-sho (academic society award and technology award) in the building equipment category from the Society of Heating, Air-Conditioning and Sanitary Engineers of Japan for the implementation of the Yokohama City Hall environmental and facility plans.
The company will continue to help establish a decarbonized society by expanding the use of ground-source heat as renewable energy. 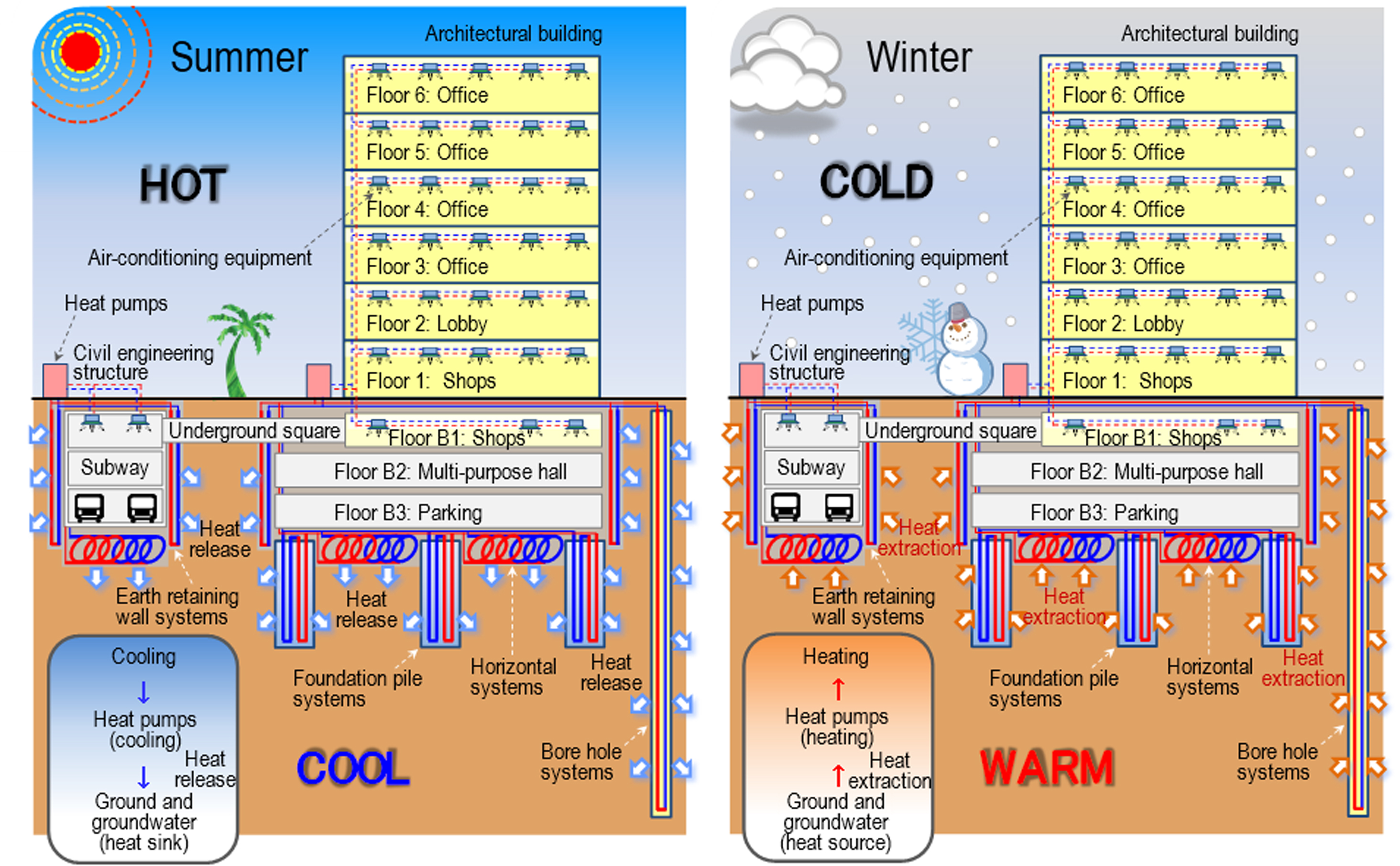 Heat Exchange Systems and Examples of Projects Which Adopted Them